Built in 1856 by Western & Atlantic Railroad, #49 “Texas” has been seen as the centerpiece in the Civil War museum at The Cyclorama in Atlanta since 1927. After being placed in the basement of The Cyclorama #49 finally went through its first restoration service in 1936 where it was restored to cosmetically resemble what was thought to be its original styling. While Texas was used mainly in the transport of goods it was also used to chase spies in what is known as the “Great Locomotive Chase” which was a fifty-mile chase performed in reverse!

Georgia Rigging Inc. was contracted to perform the project based on their reputation in handling age old artifacts. With the rich heritage of the Texas needing to be preserved Georgia Rigging seen that the rigging and transportation work was performed with extreme care. It was an honor to assist in the preservation of this historic piece of Georgia’s history.

Utilizing a 165-ton crane at The Cyclorama in Atlanta, Georgia Rigging used a three spreader beam setup and two under lift beams to successfully pick the 53,000-pound locomotive from the exterior basement wall of the museum where it rested for nearly 88 years. We placed it onto a double drop lowboy trailer and its tinder car onto a flatbed truck where we then transported the historic piece to Spencer, North Carolina where it will undergo its second restoration process.

Georgia Rigging looks forward to the return of Texas to the Atlanta area once its restoration is completed in Spencer. It will be an honor and privilege to view it once it returns to its new home at The Atlanta History Center. 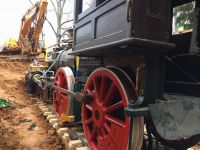 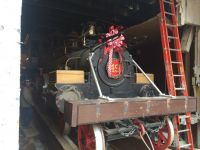 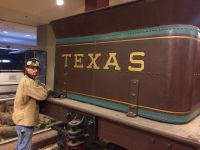 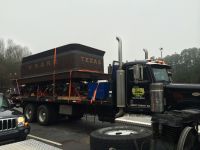 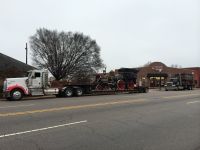